Picture it: you’re a teenage weirdo. Maybe you can do a convincing impression of a normal person, or maybe you’re too strange even to pretend. Maybe you have a few friends like you, or maybe you’re totally alone. At any rate, high school seems endless, and you’re itching to escape to something bigger and better. At some point during this struggle, a well-meaning adult sits you down and tells you, “You just have to find your niche.” It’s good advice, but the “just” is misleading. More importantly, this tidy little maxim is missing some crucial information, like: what the fuck even is my niche? 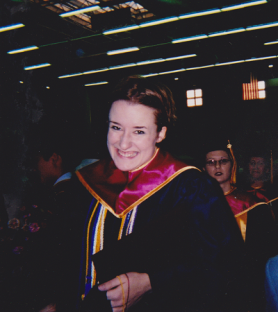 For us, our niche is each other. For fifteen years, we have each been the other’s ride or die: car-singing partner, horror movie enthusiast, fellow creepy dog-ogler. We lived together for five years, and then, when Lindsey moved to Chicago with a boyfriend, Taylor followed with no real plan, simply because by then our friendship had become the most reliable map by which to navigate the world. Even after we were living in different states, we consulted each other on every important decision. When Taylor got married, Lindsey was not only the maid of honor but the de facto event planner, running out to Michaels the morning of the wedding to buy extra buffet décor and still making it back in time to get her hair and makeup done. We have always encouraged each other’s strangeness, silliness, fierceness—and nowhere has this been more true than our personal style. In college, we filled easily hundreds of disposable cameras with vanity shots of ourselves and our outfits, hoping that the photo tech at Eckerd (who was quite obviously judging the shit out of us) would hand us at least a few frames that weren’t totally fug or obscured by someone’s finger. (These children today do not understand the struggle.) These pictures are hilarious and terrible (hilarible?) in retrospect, but they’re also a testament to how intertwined our friendship and fashion have always been, so of course we’ve included them here. As we’ve gotten older, our once-similar styles have diverged; Lindsey’s is more polished and crisp, and her makeup tends towards the natural, while Taylor favors sneakers and slouch and has a twenty-pound train case full of cosmetics. Nonetheless, we’re still guided by the same principles of having fun and pleasing ourselves before anyone else. (And believe us, we got way more side-eye for taking pictures of ourselves in the early 2000s than we do now.)

When we found ourselves back in Atlanta, together again for the first time in seven years, it felt like a sign. In many ways, The Sable Thread is the latest stage in the natural progression of our friendship, but it’s something more, too. Now in our thirties, we find ourselves pondering that initial question again: What is our niche? We aren’t teenagers anymore; we know we aren’t special snowflakes. We know there are plenty of other awesome grown-ass women out there doing whatever the fuck they want, sartorially and otherwise. We know that these women come from all over the place and are comprised of all different shapes, colors, and sizes. And where do women like that—who love clothes but are often uninterested in or shut out from mainstream fashion—go? Well, we hope the answer is here: to this little corner of the Internet.

You will never read a “dos and don’ts” post here. While we’ll talk about high-end fashion occasionally, neither of us has money like that, so you’ll never see us wearing couture or suggesting you have to spend to look awesome. You’ll never hear anything about cleanses or veganism (although veganism is fine! We love vegans! But we also love steak). Most importantly, you’ll never see us shaming or criticizing other women.

On the other hand, you will see us rocking fast fashion, showing love to our hometown of Atlanta, featuring indie designers and makers that we love, peeping the style of our fellow women on the streets, getting stoned and talking about HGTV, and hopefully much more, as our community grows and those of you reading and commenting have the opportunity to steer us in new directions. Ultimately, we want The Sable Thread to be about more than just ourselves. We want it to be about you, too. We want to foster excitement and positivity and connection. And we want to be well-dressed while doing it. Thanks for taking this ride with us. We hope it’s as fun for you as it has been so far for us.

(Keep scrolling to see the evolution of our outfits over the years and to get to know us a little better.)

When do each of you remember meeting the other for the first time?

What was your initial impression of her?

How would you describe your style?

How would you describe your bestie’s style?

How has your own style evolved since you first met?

What is the most memorable outfit you remember the other person wearing?

What does the other lady wear that you feel like you never could?

What are your hopes for The Sable Thread?

That’s all for now! Thanks for reading, and we’ll C U Next Tuesday! (Yes, we decided to post on Tuesdays just so we could say that.)