Everyone in this town loves Oakland Cemetery. It’s legendary. It sits at the heart of the city, and its original six acres are one of the oldest plots of land in Atlanta, having been spared destruction by Sherman’s fires in 1864. It makes sense that we’d do a cemetery post the last week of Halloween, but in actuality, Oakland is deeply unspooky. It’s peaceful and beautiful, and on the day of our shoot, the weather was perfect, too. We might have actually been a little Too Goth for the locale. Still, getting dressed up and taking pictures in one of our city’s most beloved spots was a great way to spend an October afternoon – and maybe ghosts like a kimono and a visible bra as much as we do. 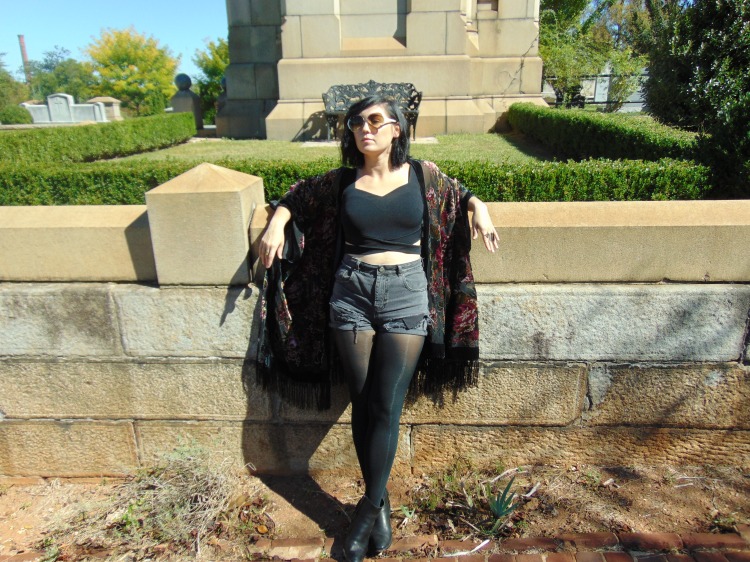 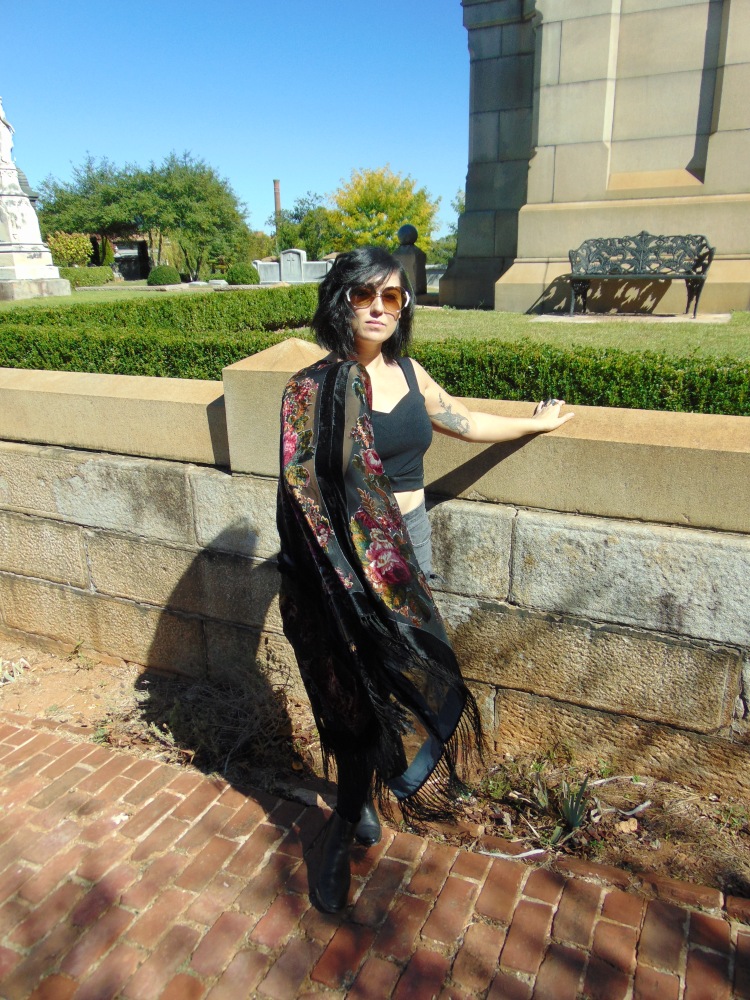 What are you wearing?

LC: This might be the least surprising thing I’ll ever say, but almost everything I’m wearing here is from ASOS, the exceptions being the standout piece – the kimono jacket, which is from a UK-based Etsy shop called Velvetcocos – and the boots. I don’t remember exactly where they came from, but they are Dolce Vita, which is sold in lots of different places.

TFO: The jeans are from ASOS, the shirt is from Urban Outfitters and still available (also, I’m sad to report that later on this day I splattered chicken wing grease all over it and ruined it forever), the boots are from Shoedazzle, and the bra is a mystery. The scissor necklace is by Ornamental Things, an Austin-based designer that I love. 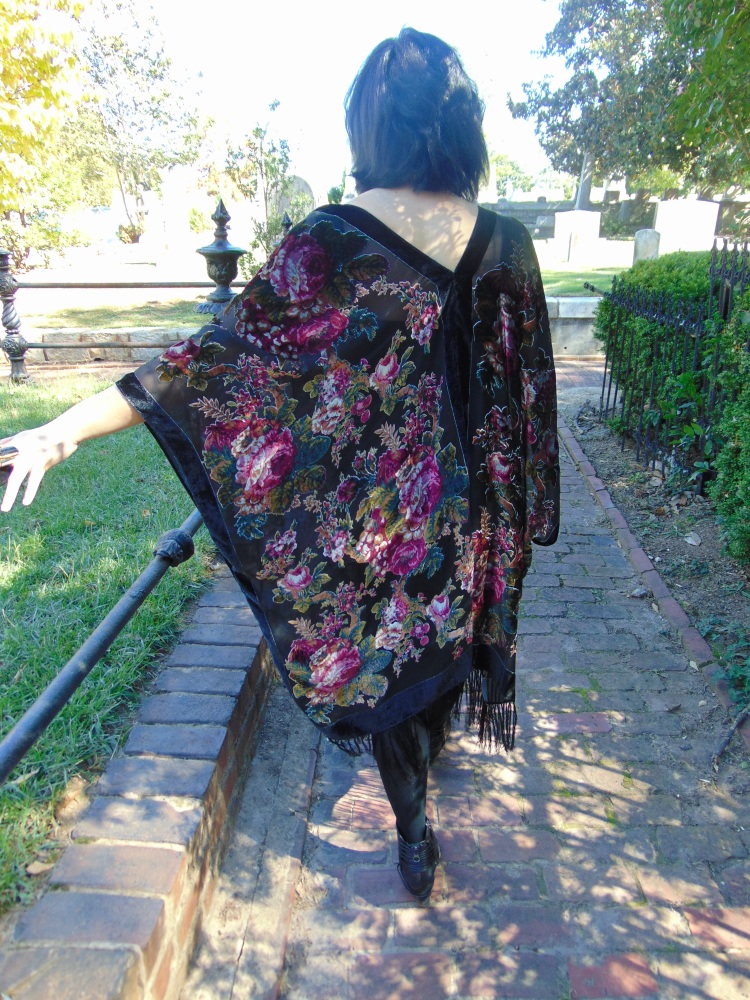 How would you describe this look?

LC: Like a grungy 90’s teenager with a cool older sister who’s really into Stevie Nicks and tarot readings and who occasionally lets her younger sister borrow her clothes.

TFO: Witch going through a club phase? Weird neighbor who has a thousand cats? 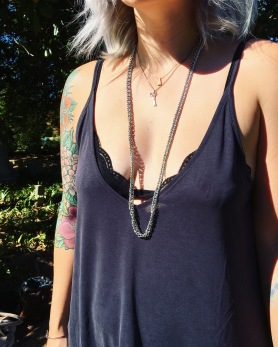 What is the oldest part of this ensemble? The newest?

LC: The kimono jacket is the oldest by far, and thanks to my Etsy transaction history, I know the exact date that it was purchased: November 7, 2014. I bought it to wear to a New Year’s Eve party that I was going to in Chicago. I ended up wearing something a little bit more streamlined but equally as velvet. The sunglasses are the newest. I bought them about a month ago to replace a pair that I later found at the bottom of one of my purses.

TFO: I think the oldest is the necklace, which I bought at Le Garage Sale in Austin several years ago. The newest is the shirt, which makes the aforementioned chicken grease disaster all the more upsetting. RIP, tank top. We hardly knew ye. 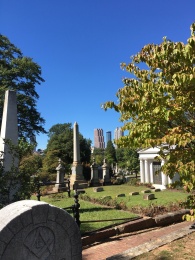 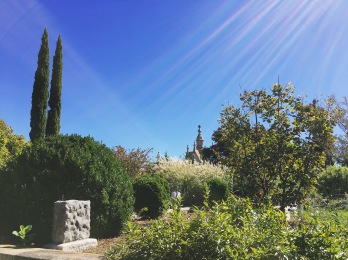 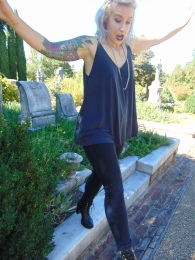 What’s your favorite thing about your outfit?

LC: There are elements of this outfit that are sort of at odds with each other. The crop top and shorts + tights don’t really “go” with the kimono – rather, they look like they might be seen separately on two completely different people – but that’s precisely why I’m so attracted to the idea of putting them together. I like for there to be some sort of contrast in the things that I wear, because I don’t feel like there’s one particular style that’s completely representative of who I am or what I want to put out there.

I also love that there is a softer element over a more edgy base layer, and that it’s difficult to pinpoint a specific decade that this looks like it belongs in. And I love the idea that because it doesn’t have any strong ties to a specific style, that makes it something that is uniquely my own. This kind of desire for balanced contrast and a very personalized aesthetic comes through in other aspects of my life as well, particularly with home decor. My house is a solid mix of industrial, mid-century modern, and antiques that were handed down from my grandmother. It seems totally weird to throw all this shit together, but I think as long as you’re being true to yourself and what you like, and it comes from a place of love, the rest will just sort of… figure itself out.
TFO: If we’re being honest, my favorite thing is my makeup. When we were looking through these pictures, I was kind of underwhelmed by my outfit in retrospect. It was… missing something. (Possibly a kimono?) I was also having an atrocious hair day, so thank God my face was on point. A lot of times I find that makeup is actually the focal point of a look for me, anyway – a fierce paint job can make anything look pulled together. And as has already been said in other posts, I love, love, love a weird lip. This lipstick is one of Sephora’s cream lip stains, and I’m super into its metallic finish, its intense color – so purple it’s almost blue – and that it stays put almost too well. It takes a whole makeup wipe to get it off.
I will also say that as uncomfortable as it is to be putting a look out there that I’m not crazy about, showing what I think is a misstep and being real about it feels representative of what we’re trying to do here. We’re not perfect. Sometimes we try things out and they don’t quite work. Sometimes there’s photo evidence! But that’s part of the process. It’s how our personal aesthetics evolve. And in that sense, I’m proud to show you this weak-ass getup. 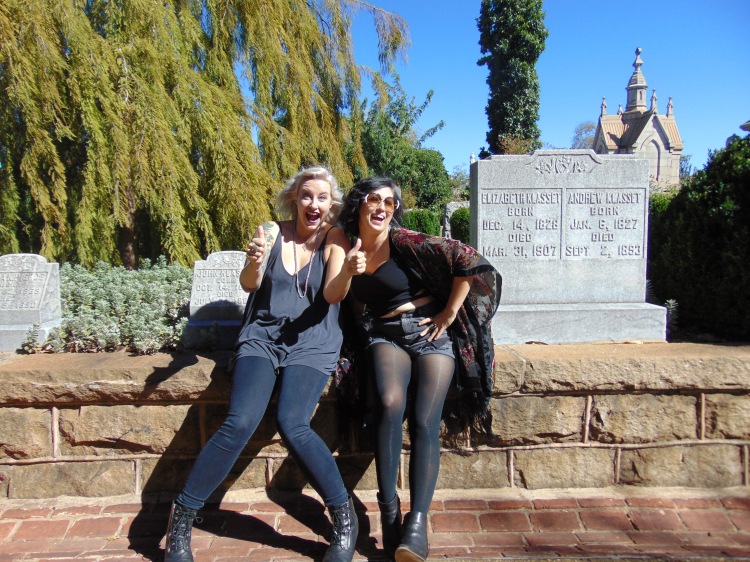 That’s all for now, boos. Thanks for reading. As always, we’ll C U Next Tuesday!
xoxo
TST